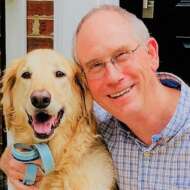 Published on June 15, 2022
Categories: Reading Between the Lines With Derek Maul

Father’s Day is one of my favorite celebrations because no-one makes too much of it, other than to let dad pretty much do whatever he wants. For me, that typically involves parking myself on the sofa and enjoying a few hours of U.S. Open Golf without feeling lazy or selfish.

However, being a Sunday, I am absolutely going to start the day at church. There’s no better context than worship when it comes to embracing the gratitude that comes over me when I think about what it means to be a dad.

Before church I’ll be posting the following on Facebook:

“Hey, Dad, I’d post on your wall if you had one! Happy Father’s Day from one grateful son. There are lots of ways to look at Dad’s Day (being a dad, being a son, being a grandfather, being a father-in-law, being married to Rebekah so I can be a dad…) but having a DAD is how this all started for me. So, thanks for being.”

Of course, I never truly “got” the dad thing until June 20, 1982, when Andrew Kemp Maul made his spectacular debut after two days of labor and a 5:00 AM ride to Piedmont Hospital. Two years later Naomi Rebekah wildly expanded my understanding of “the dad thing” with her unique interpretation of life.

The following two decades completely redefined our world. When we drove to the hospital in 1982, we were two young adults starting out. Within a few short years we were completely different people. This year, 2022, fatherhood is one joy stacked on top of another. I can’t thank my children enough.

Not too long ago, my wife Rebekah preached a “Names for God” series. The Bible uses over 200 sobriquets to deal with the limitless scope of who God is; but for Jesus, “Father” was the most common.

“Let the beloved of the Lord rest secure in him,
for he shields him all day long,
and the one the Lord loves rests between his shoulders.”

“He shielded him and cared for him;
he guarded him as the apple of his eye…”

Life is often understood as a series of struggles, and the role of “dad” is no exception. But this is a struggle we engage gladly, most especially when we take the journey with our Heavenly Father as companion and guide.

Derek is a North Carolina-based writer, journalist, teacher and speaker. He is the author of numerous books on what the Bible reveals as essential in becoming a man of God.

He is convinced that his four grandchildren are exactly the hope and promise that this world needs. His conviction is important to understand because it reveals a lot about his theology, and how he believes our identity as God’s children plays out in the day-to-day experience of living in a world where darkness, disappointment, and defeat are all too common.

He is a committed encourager, and a pilgrim in progress. He divides his time between writing and traveling to speak about the fully engaged life. His passion is to connect people – men and women – with a more vibrant, authentic experience of what he calls “The Life-Charged Life.”

Reading Between The Lines, With Derek Maul is published every Wednesday on Christian Grandfather Magazine.